WHAT 20STM DOES Communication Strategy Advertising&branded content 3D Animation & Illustration Digital Products, Video & Motion Design Hybrid Event User Engagement Branding & Art Direction Emerging Technologies: Augmented-, Virtual-, and Mixed Reality, Mapping, Artificial Intelligence, etc. Immersive Marketing Interactive Installations & Digital Scenography Streaming & 360°/3D Studio Recording Social Media Strategy & Implementation Campaign localisation Event Logistics Media Planning and Buying Public Relations 20 STM Works by design thinking When it comes to solutions, the old saying “two heads are better than one” rings true - as long as one of those heads is from the client team. Projects and services that involve exchange and co-creation are much more compelling and relevant, and are therefore more likely to reach your communication objectives. The Design Thinking approach is an agile and iterative way of working that eliminates silos within the company by organising the team and the work according to an individual’s skills and capacities rather than traditional pillars. It also allows the client to be involved at every step. We know our business, but we surely don’t know yours as well. Before collaborating on anything, we always start with getting to know each other. We believe that the key to a successful project is a humancentred design ethos that lies in understanding the needs of the client team. This includes the likes and dislikes of the team when it comes to how a project is executed, planned, marketed, published and evaluated. At 20STM, we create success by getting our minds into the same cloud as your needs, your goals, your expectations, your story… This means 20STM will attentively listen to the client team in order to identify challenges so that we can frame these issues in a compelling way, in order to smoothen the process and to propose solutions.
18 personnes dans leur équipe
Parle Anglais, Français, Néerlandais, Polonais
3 projets dans leur portfolio
Travaille à distance à travers le monde
Membre Sortlist depuis 2021
Fondée en 2013
Aucun avis client pour le momentSoyez le premier à en ajouter un
Nom du service
Niveau d'expérience
Avis clients connexesÀ partir de 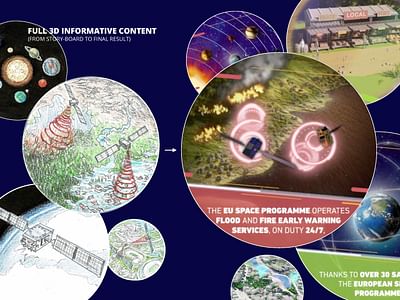 Projet réalisé pour Europoean Commission dans l'industrie Gouvernement et administration pour un public B2B / B2C en 2025.WORLD EXPO DUBAIWe have organised events for the Galileo and Copernicus Programs of the EU and developed several visual identitues, produced more than 15 different films, and a few interactive experiences. However, the coolest one is certainly the one we are producing currently for the World Faire - EXPO 2020 Dubai.We produced full Led cylinder-shaped constructions, that interact with the public. The cylinders display pure informative video content (top screens) and also, at the same time, offer a real-time interactive and visually « as breathtaking as possible » experience (side screens).SPACE RELATED GUESTS AND STAKEHOLDERS ONSITE EVENT (BIG)Copernicus, previously known as GMES (Global Monitoring for Environment and Security), is the European Programme for the establishment of a European capacity for Earth Observation. In 2018, the programme celebrated its 20th anniversary.Coming up with an original concept, knowing that the scenography was limited by the boundaries of the place where the event was organised - a splendid hotel located on the banks of Lake Garda, in Baveno, Italy. In other terms, quite far away from any big city, such as Milano.We designed a concept based on a 13 meters long high-definition LED screen and we also imagined an ambilight show and produced 58 different films and animations that interacted with the orchestra, the moderator, the speakers and the public. The show lasted for 3 hours and 3 days were needed set it up, and conduct all the rehearsals.GALILEO PROGRAMME) - VR TOOLGalileo is the European Union's Global Satellite Navigation System that provides accurate positioning and timinginformation.20STM produces a large number of immersive and interactive experiences, but also films and animations. We started 5 years ago with a VR experience that simulated a helicopter winching (SAR Service) and which was a big hit during professional fairs. Since then, we have developed mappings, light shows, full Led installations, augmented reality projects and other interactive experiences. Back in January 2020, they asked us to set-up a fully-fledged and functional Virtual Reality experience, explaining the main Galileo services et benefits. The main objective was to create a portable VR kit that provides events’ visitors a valuable hands-on learning experience that encourages exploration and discovery while increasing skills and understanding of EC Galileo Program behind the VR Experience. The client waslooking for a realistic three-dimensional environment presented to the users in such a way that any doubts are suspended, and it is accepted as an environment in which it is interacted with in a seemingly real or physical way.The VR experience had to be be accompanied by a physical immersion to enhance the perception of being physically present in a non-physical world. It had to allow true interactivity, be easy to use and install and totally secure. The experience had to be designed for two people at the same moment, in order to reduce waiting lines. The experience had to be transportable by one person and installable by max two people and, finally - last but not least - the sized of the packed equipment had to fit with regular doors and elevators.Due to the technical difficulty of the project and the very tight deadline and budget, we started by a very detailed management plans with clear timelines on the services to be delivered. Once approved we start writing the concept note, after several brainstorming sessions with the client. We then launched the storyboard process, with detailed atmosphere boards. After having secured the storyboard, the 3D artists, animators and Unity developers created the environment of the 7 “use cases” that needed to be illustrated in the experience. GovSatCom 360° Campaign The European Union Governmental Satellite Communications (EU GOVSATCOM) initiative provides secure and guaranteed satellite communication capacity and services to EU governmental stakeholders (Member States and EU Agencies and institutions). It is key for various missions in the field of security, defence, humanitarian aid, emergency response and diplomatic communications. We design and implement a coherent ATL and BTL communication and branding strategies/campaigns that include: Brand (name), Mapping of existing activities, Videos, Promotional material, Web, Social media, Communication material, Media coverage, Stakeholders Events and Workshops and General Public event. 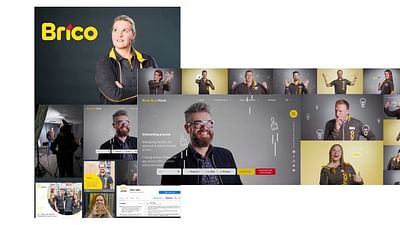 Projet réalisé pour Brico/Maxeda dans l'industrie Vente au détail pour un public B2B / B2C en 2025.BRICO / BRICO PLANIT - ONBOARDING CAMPAIGNMaxeda DIY Group is a market leading DIY retailer that operates 345 stores across the Benelux with over 7,000 employees. They runs three DIY formats: Praxis in the Netherlands, Brico in Belgium and Luxembourg and BricoPlanit in Belgium. The majority of their stores is between 3,000-5,000 square metres and counts between 35and 300 employees. 20STM works for both, the Maxeda Group as a whole and, more specifically, for the Belgian communication department.SCOPEBrico and Brico Planit communication and human ressources managers are constatnly on the lookout for new talents. They were two main challanges. The first and foremost was the fact that Brico and Brico Planit are structured very differently, and the website as well as all the onboarding tools had to overcome these differences to propose an equal user experience to all the candidates, in French and Dutch. The second challenge - and by far the most challenging - was to give a new boost to the way Brico an Brico Planit envisage the onboarding process.HOW DID WE MAKE IT?We based our strategy on… people. Making them as friendly and as human as possible. Even if working conditions may be sometimes difficult, the team spirit and a rewarding work atmosphere are the Brico and Brico Planit main assets. Specific graphic and motion design layer, based mainly on simple yet funny emoticones, helped us to achieve the result we were looking for - something simple, human, and warm. 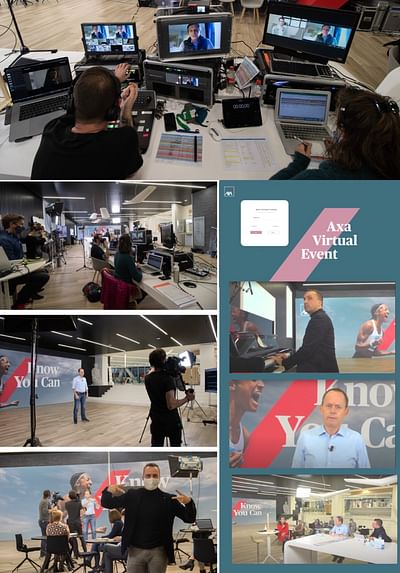 Projet réalisé pour Axa Belgium dans l'industrie Assurance pour un public B2B / B2C en 2023.AXA BELGIUM - LEADERSHIP FORUM ONLINE EVENTSCOPESince the COVID-19 outbreak AXA launched a series of small live events (ex : a chat with Nafi Thiam) and thematic webinars (ex : a session with specialists about the pandemic and the mental health). This project was however bigger than the others since it was meant to replace the Leadership Forum, the annual event for 400 AXA top managers.CHALLENGETechnically speaking, this shooting was extremly complicated. Indeed, since March 2020 and for sanitary reasons, AXA employees are divided into 2 groups - the red one and the blue one. They cannot be in the same building at any cost. Since the shooting had to gather people from the two groups, we needed to install two parallel set-up’s in two different AXA buildings. It is important to highlight that AXA is a financial institutions, with protected networks and encrypted connections.HOW DID WE MAKE IT?Since we shoot quite often at AXA premises, we didn’t really needed to do a location scouting, we converted this time into extensive testing, technical set-ups and dryruns. Indeed, the 1hour15 script was complex and involved 26 people appearing physically on one of the two sets or via Teams.